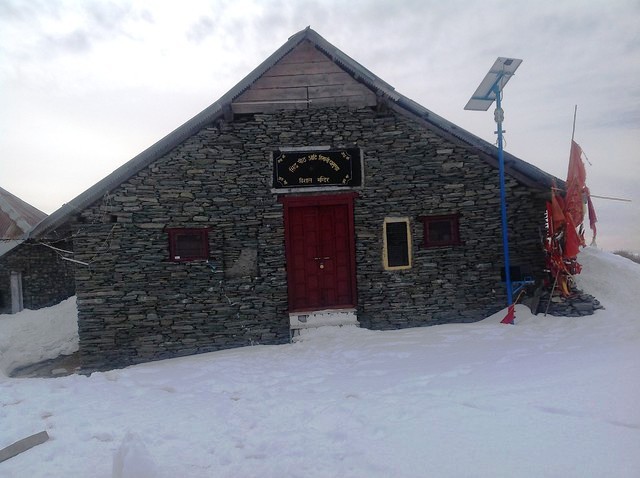 I have been making plans to visit Palampur(Himachal Pradesh) and trek to adi Himani Chamunda temple for quite a long time so when I got a chance to go there last week I got myself ready at once. I was ready with my backpack and amit, my friend was ready with his own backpack. The two backpackers boarded a state transport bus which would take around 12 hours to reach Palampur. Both backpackers were ready with shawls and winter gear to cope with the cold chilly journey to the hills.

We both reached Palampur at 5:30 in morning and were welcomed by cold chilly winds which froze us both to bones. It took us a while to get ourselves together at a tea stall while we waited for a bus to Dud village which is the last motor able spot. Hot cups of tea gave us much needed warmth as we waited for bus. Bus to Dud arrived at 6 and we quickly boarded the bus. We both got down at dud and walked towards jia, a small village with terrace farming and had our breakfast there. We also packed our lunch and filled water bottles for the trek. It is always good to carry food and water with yourself on treks which you are going to take on for first time as you never know when you run out of energy! So we started our trek with aim to reach back Jia by 6 pm to catch last bus back to Palampur.

It was going to very difficult but we had to do it so we decided to move fast. It was our first time to adi Himani Chamunda temple which is at height of around 3100 meters in Dhauladhar ranges of Himalayas. We soon crossed jia village and left behind its stone and mud houses. From here began a steep incline which really warmed up our bodies. The sun was shining brightly overhead as we walked on the rocky terrain. The Himalayan griffin vultures soared high in the sky and looked like kings of the sky to me and I wished I could also fly like them but since I can’t fly so I trekked my way up with fellow backpacker. As we were climbing uphill we came across small shepherd huts made of stone with stone slates as their roofs. Floors were made of mud and dried grass. Shepherds regularly cross over Dhauladhar ranges to enter Chamba through several passes in these ranges. They go to warmer places in winters and come back in summers along with their flock of sheep and goats. They also keep mules which help in transportation and dogs which act as guards. It is a wonderful relationship between humans and animals on display in this part of the world. Trek ahead was straight incline so we were really pushing our bodies.

We halted for our first break after trekking for around 4 kilometers. As we stood there we got a perfect view of Daad and jia villages. We wished we could stay here for 2-3 days as it was very beautiful. We started after a stop of 20 minutes and started climbing again. It is always good to manage your breaks and during breaks try not to lie down or sit for a long time as it breaks your momentum. As we were trekking up the terrain started becoming more and more rocky. The rocky patches were covered with fresh snow which was looking beautiful in the dazzling sun above us. But soon weather took a turn and clouds covered up the sun. It was 12 pm on the watch and we took our second pit stop. We were running short of water so we decided to fill our bottles with snow! We stood there near the rhodendron trees which were laden with flowers which are consumable, so we ate some flowers and felt revitalized. Locals also serve the juice of these flowers with little bit lemon inside and it is very good for health. We started again after a flowery treat and zig zagged our way on rocky icy patches.

We also noticed some footprints of leopards and goats on the ice which told us that it was wild country out here up in the hills. But we could not think much about wildlife as we had a mighty and high mountain in front of us to climb. This straight incline left us gasping for breath. Suddenly I remembered that we had parleG in our backpack so we ate them in no time. It tasted very yummy on such high altitude and we had our pit stop. After that we were ready to complete our last leg of the trek. Still we had not got our first glimpse of our destination but after walking on icy rocky trail for around one and half hours we got our first glimpse of temple.

Soon we both reached there. It was a magnificent view of the temples with snow capped Dhauladhar ranges in the background. It was very cold and chilly. Temples were covered in snow. The temples of Adi Himani Chamunda mata and lord Shiva are sites of pilgrimage for locals. Legend has it that Pandavas visited this holy place after winning Mahabharata-the epic battle. The temple complex is made up of perfectly carved stones but I was little confused to see that Lord Shiva’s temple had no roof and I would inquire about it may be on my next trekking trip to this place. So here we were just two of us surrounded by mighty and majestic Dhauladhar ranges. It was a wonderful experience up atop with Gods. So we enjoyed the natural beauty for around 30 minutes or so and paid our homage and respect to Gods and decided to decline as it was around 2:30 pm by the watch. With the blessings of Maa Chamunda we started our decline back. It was also as tough as ascent but we did not stop on our way down as we had very less time on our hands. We descended down in almost three and half hours without any breaks and were left in shambles when we reached Jia village. We had some food at the food shack and boarded the bus back to Palampur with tired bodies but with fresh heart and soul. We were high on faith and our minds chanted prayers in respect for Adi Himani Chamunda Mata. Both backpackers boarded a bus to New Delhi from Palampur with happiness and Josh in our hearts as we had accomplished our goal. Jai mata Di 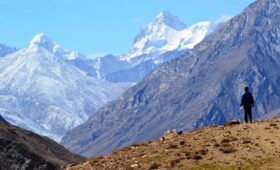 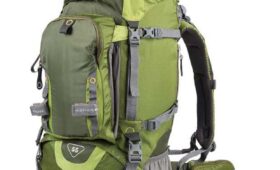 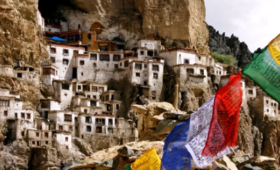